Veterinary practises in numbers in Europe

According to Eurostat, there are more than 214,000 people employed in the veterinary services (pracises) in Europe. The number of enterprises in the Veterinary Service is more than 70,000. In accordance to EUROSTAT the estimated service size in euros is more than €14,200,000,000 with an value added estimation of €7,400,000,000.

Table presents data on number of enterprises in total in veterinary services sector in the EU-28 in year 2012 in accordance with Eurostat, 2012.

Most of Enterprises of veterinary medical services are micro-enterprises and this tendency is similar across the Europe.

Below table presents  Key size class indicators for veterinary activities for European Union EU-28 in year 2012 in accordance to the Eurostat data.

It can lead to the conclusion that market of veterinary medical services in Europe is of high involvement of personnel, costs but rather stable and with growing number of SME. What should be also noticed is that number of services are growing from year to year in accordnace with national statistical data from European Union Member States.

Below table of EUROSTAT data presents country breakdown of types and scale of veterinary enterprises (veterinary offices) across European Union in year 2012. 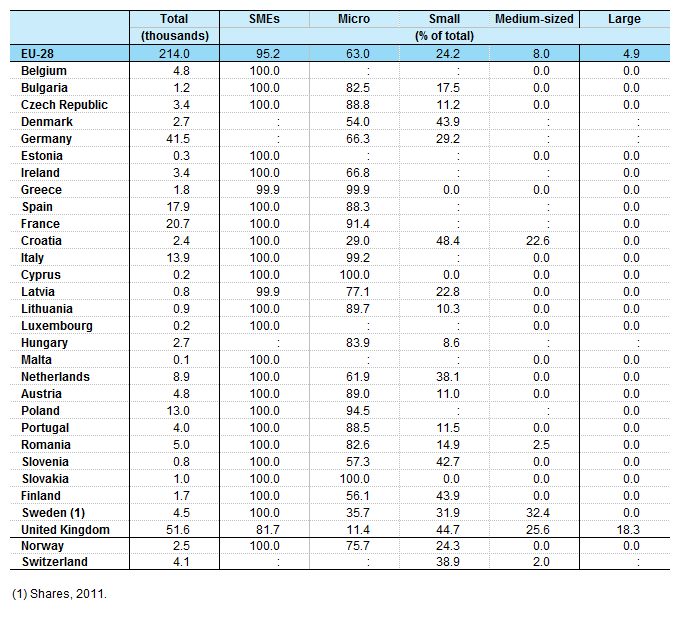 It is observed, that in the countries taking part in the project, the majority of veterinary services are micro enterprises as well, following the trend in Europe. It can lead to the very initial conclusion that veterinary offices and medical veterinary doctors might be facing the challenges and opportunities similar cross the Europe, in terms of enterprises’ structure as well as type of work organisation.

Any cookies that may not be particularly necessary for the website to function and is used specifically to collect user personal data via analytics, ads, other embedded contents are termed as non-necessary cookies. It is mandatory to procure user consent prior to running these cookies on your website.